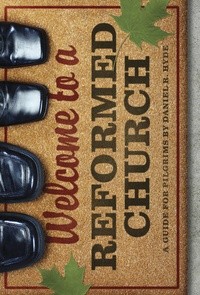 A Reformed church is Christian, Protestant, Confessional, not Catholic, not “dead, traditional, or ritualistic.” We believe that sinful humans are saved by grace alone, from eternity past to eternity future, and that we experience this grace of God as the Holy Spirit uses certain means that God has appointed in the Church: the preaching of the Word and celebration of the Sacraments.

Introduction
AMONG THE circle of churches in which I once worshipped and even was a youth pastor, you either were a Christian, which meant you went to a “Bible-believing, Spirit-filled” church like a Foursquare Church, Calvary Chapel, or a non-denominational church, or you were a Catholic, meaning, Roman Catholic. I was aware of some other kinds of churches because at different times I liked a Presbyterian girl and even dated a Lutheran girl, but their churches were considered more or less Catholic because they were “dead,” “traditional,” or, “ritualistic.” To the chagrin of some in my circle of family and friends I soon became one of “them.”

What is a Reformed church anyway? Why are they called “Reformed”? What do they believe? Where did they come from? What do they do? These are the types of basic questions I hope to introduce here. What I hope I am able to communicate to you here is that Reformed churches are Christian churches—believing that the Bible is the Word of God, that there is only one God who exists eternally as a Trinity, and that Jesus Christ is both God and man. Reformed churches are also Protestant churches—rejecting the claims of the Pope to be the Head of the Church, acknowledging instead that Jesus Christ is the Head of his Church, and that he rules and governs his Church by his Word and Spirit. Finally, Reformed churches are just that, Reformed churches—believing that sinful humans are saved by grace alone, from eternity past to eternity future, and that we experience this grace of God as the Holy Spirit uses certain means that God has appointed in the Church: the preaching of the Word and celebration of the Sacraments.

Historical Roots
I WANT to begin with a little history lesson. I know, I know, we enlightened moderns are not much into history, but care about the here and now and are busy planning our futures. We are guilty of what C. S. Lewis called, “Chronological snobbery.” I want to begin with some history before turning to the beliefs of Reformed churches because you need to know that Reformed churches did not just come out of nowhere.

Derided by their opponents and known popularly as “Calvinism,” after the theologian and pastor in Geneva, John Calvin (1509–64), Reformed churches are those Christian churches along with Lutheran churches that trace their roots to the sixteenth century “Protestant Reformation” in Europe, and beyond that, to the early Christian church of the several centuries after the apostles died (AD 100–500).

The Protestant Reformation
Reformed churches are also Protestant churches. German princes who supported the ideas of Martin Luther first used the term Protestant at the Second Diet of Speyer (1529), a meeting between the Holy Roman Emperor and his rulers, some of whom issued a protestatio against him because of their convictions against certain Roman Catholic teachings. Along with the Lutheran churches, Reformed churches protested the Roman Catholic Church’s false teachings. The main teachings of Rome to which these reform-minded groups protested were Rome’s insistence that the Bible was only one authority among many, including tradition and the Pope, and the teaching that sinners were saved from their sin and God’s wrath by co-operating with God’s grace in doing good works. The protestations of the Reformers were that Scripture alone, sola Scriptura, was the ultimate authority in the Church and that sinners are saved by God’s grace alone, sola gratia, which is received through faith alone, sola fide, which is placed in Christ alone, solus Christus. These teachings, along with others, were expressed both by the Lutherans and the Reformed in various confessions of faith and in various catechisms.

What Our People Say About Us
Bill Bean
I love my church family! The pastor preaches straight from the Bible and makes sure we understand the lesson.
Jeanette Kinkade
A place of opportunity to hear the Word of God preached, hear questions and answers in Sunday school, study and learn our Christian history, share times of fellowship with friends, and enjoy the warmth and comfort of being a part of a welcoming church family.
Norma Tretheway
This church has the most understanding, non-judgmental people I have ever been acquainted with. They follow the Lord's teachings.
Helen West Tichy
I love that we hear so much of God's Holy Word each Sunday. I love the Bible-based sermons.
Anita Hogan
We have a very warm and friendly church family. The preaching is directly from the Word of God.
prev next